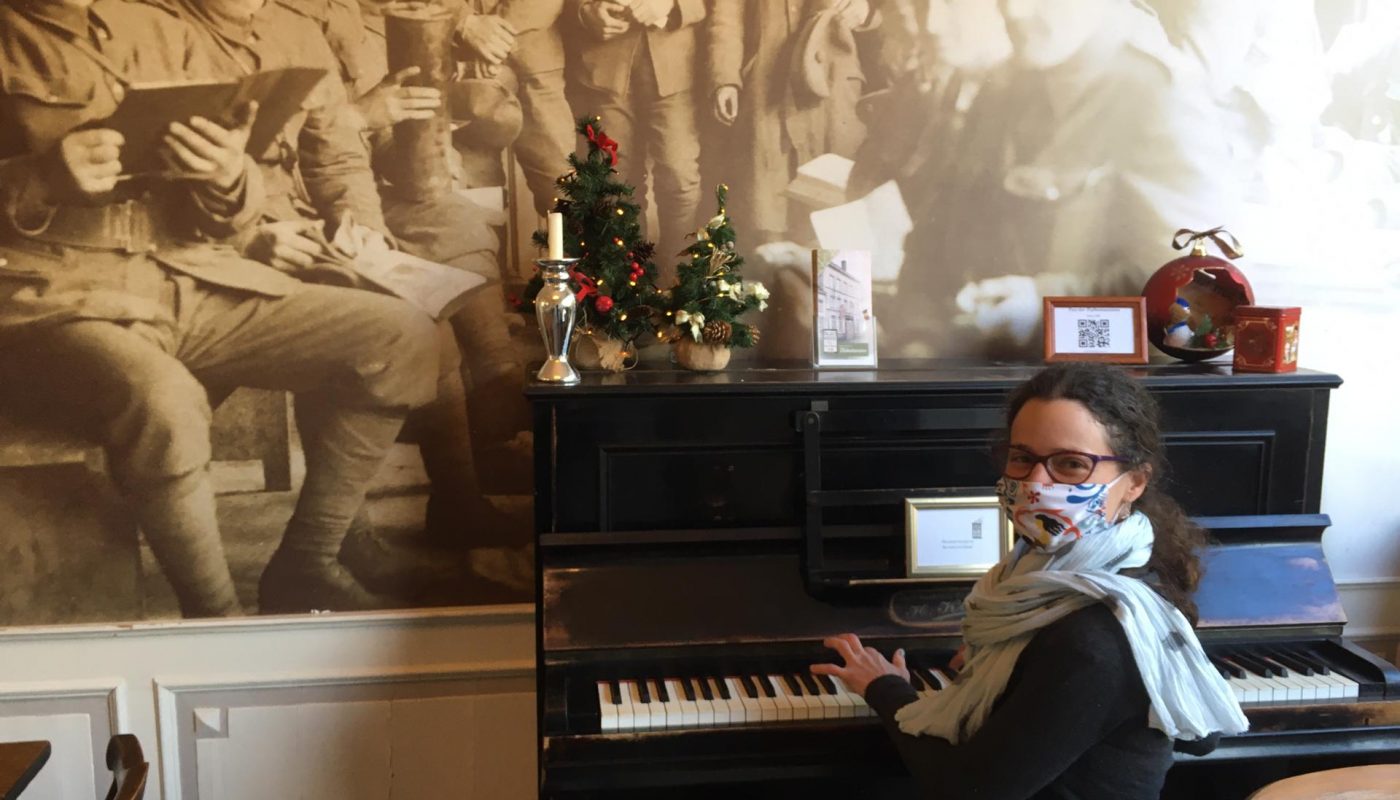 To begin, Poperinge is a small town that has existed for a very long time, its existence dating all the way back to medieval times. Located in West Flanders (West-Vlanderen in Nederlands), the town is only a few kilometers from the Belgian-France border and so this visit was one of our “Borderlands” variations on the “Mondays On the Move” theme. Hopefully, with the distribution of a vaccine, these borderlands meetups will become more frequent. There are many places and stories to share along the border of these two countries.

Poperinge, along with Ypres, was a “safe” town during the first World War. In the rocky era of COVID-19, it seemed to carry on with this tradition as a safe space for Sarah and me to meet. We were happy to wander along the quaint narrow streets and admire the architecture. We thrilled to find a picnic table to set out the lunch we had brought in anticipation of restaurants being closed. I had made sandwiches and a large thermos of hot apple cinnamon spice tea, and we drank from the festive plastic cups from last winter’s xmas market in Brussels. This year, sadly, all xmas markets seem to have been cancelled. The decorations around us brought some cheer, along with the clear weather. It was cold but thankfully there was actual sunshine as opposed to the liquid variation that had been predicted for the days leading up to and following our visit.

There were several sculptures of Pegasus and a restaurant by the same name, and I wondered if there was a connection to the history of Poperinge and this mystical creature.

Before long, we arrived at the Talbot House, an assuming structure painted in white with black shutters sandwiched between other buildings on the road. In these times, it could be easy to walk by, but I imagined this place as a kind of beacon for weary travelers during World War I.

As our host, Simon, told us when he welcomed us to the Talbot House, Poperinge is the end of the line for the train and, in his estimation, “the end of the world.” When I shared this perspective with my husband upon my return, he suggested that Poperinge was, in fact, “the beginning of the line.” Having lived at the literal end of the world in bush Alaska, Poperinge felt like a fairly happening place with shops and beautiful architecture and sculptures. When Sarah and I walked through town from the train station to the museum, there was a sense of absence and quiet, but we attributed this to the lockdown measures in place. It was also the lunch hour, and if small Belgian towns outside of larger cities like Brussels are at all like their neighbors in France, then everything shuts down at lunchtime.

For soldiers taking a pause from the horror of the front lines, the Talbot House was the beginning of a moment of sanctuary and peace in the midst of chaos all around. Known as “Toc.H.,” which stood for, “To conquer Hatred,” this was a space of friendship and camaraderie where all were welcome, particularly weary soldiers. Far from family and home, these men of all ages could find a temporary refuge at the Talbot House.

Sarah and I had the house to ourselves for the majority of our visit. We walked through the rooms on the ground floor with our “Tubby’s Tablet” in hand, listening to the history of the house. On the upper floors, renovations were being done so we were not able to venture into the different rooms, but even with the feeling of transition we felt very welcome. Simon even started a holiday-themed film they had just finished moments before our arrival, and we sat a safe social distance from one another with masks donned as we watched footage about people from a bygone era.

Wandering about the house and gardens and performing our chosen migration song, we had the feeling of a return to normalcy, if only for a brief moment. Such was the spirit of the place, which is ever-present even after so many years. Even with the passage of time, I experienced that magical feeling of walking in the footsteps of so many who had passed before me along the same corridors and floorboards.

We were a bit out of practice from so many weeks of staying at home. I had tried to remember all of the accoutrements I generally brought with me for our Monday travels. Having brought the tripod, I realized with dismay when I took it out of its travel case that I had neglected to bring the little piece that served to attach my iPhone to the tripod head. In a panic, I texted my husband, who suggested we lean the phone against something. Which we did.

We also had to shift our plan to film our performance in the warmth of the tea room to an outdoor space, as there was a couple wandering through the house having their own unique experience when we were gearing up to sing and we did not want to interrupt them.

We found a lovely (albeit cold) spot, seated at a picnic table that gave a view of the tea room just inside. The warmth of the lighted chandelier lends a feeling of intimacy, which was very real inside the house and in the gardens, where xmas lights and decorations had been thoughtfully placed. The brilliant last light of the afternoon brought a colorful glow to the tall trees around us, and we sang beneath the raucous, lively calls of jackdaws, black-headed gulls, and collared doves.

The song we chose to sing was one about the idea of being “in between,” which seemed a fitting theme for a visit to a space created as a home away from home, a sanctuary between the front lines and loved ones who were far away.

Called “Habibi, Habibi” (Arabic for “my lovely, my lovely”), we wrote the song with a resident at Petit-Château who had traveled to Brussels from Palestine. On that Monday visit to the center, Sarah had written a line from a poem in the book “England: Poems from a school” at the top of the blank page:

We had asked a resident who was passing by if he could translate the concept of being between into Arabic for us and write it on the page below the line of poetry.

This turned out to initiate a bit of a discussion about the concept of between, which the resident said did not exist in Arabic. We tried gesticulation and even lining up a few people in a row and pointing to the person in the middle as being “between.”

With understanding dawning, the resident began to speak in words of lyrical poetry about being far away from a loved one. We translated some of the phrases into Arabic and inserted other Arabic phrases per his suggestion, and a song was born.

It was with open hearts and minds that we lifted our own voices in song, the warmth of the words and melody keeping our spirits warm (if not our bodies) as we sang in the cold garden. Even in the cold, I could feel the sense of uncanny, of sharing this space with so many spirits and hearts who came before us and who will follow, lighting our way.

The idea of being in between and not knowing if or when we might be reunited with loved ones felt especially auspicious as we near the end of a tumultuous year. We hope this song will bring light and levity to your own hearts and minds as we come to close 2020. Here’s to better times in the new year to come.

Before we left, we each purchased books and postcards to support the museum, which is also trying to raise funds to keep its doors open after the financial difficulties of a year in lockdown.

Sarah and I are in the midst of producing a second book about “Creatures On the Move” in an effort to celebrate the diversity of languages spoken between the two of us, as well as to embrace the sanctity of freedom of movement during a time when we are not as free to move about. We have also been seeking out first person narratives from soldiers in the two World Wars for the beginnings of what could become the third book in our “On the Move” series with poems and songs from “Borderlands.” With this in mind, I was delighted to hear many emotive phrases from first person accounts of experiences at Talbot House as we explored the museum and thrilled to discover they were all printed in a single book, which I happily purchased and brought home with me.

Most poignant was a phrase from Philip “Tubby” Clayton, the creative mind behind the creation of Talbot House, which we heard at the start of the first film series we watched on our portable tablet:

“Through an elaborate, iron-grilled doorway I could hear the sound of laughter and music, and pushing through the door I found myself at once in a different World. It was amazing, I felt like Alice when she stepped through the looking-glass. There were soldiers all around me, of course, and Army slang in the air, but, in stepping across that threshold, I seemed to have left behind me all the depression and weariness of the street.”

There were others that seemed a propos to our creative work with refugees and asylum seekers, where we seek collaboration and solidarity in a space where we are all free (if only creatively) to be our authentic selves and give voice to our most heartfelt hopes and dreams for our own live and for the world over.

The Talbot House as a space of equality: “All rank abandon ye who enter here.”

“The Talbot House was a refuge. You could come here and for a few hours, you could forget the war.”

“God grant that this Christmas may be our last asunder” (p. 32).